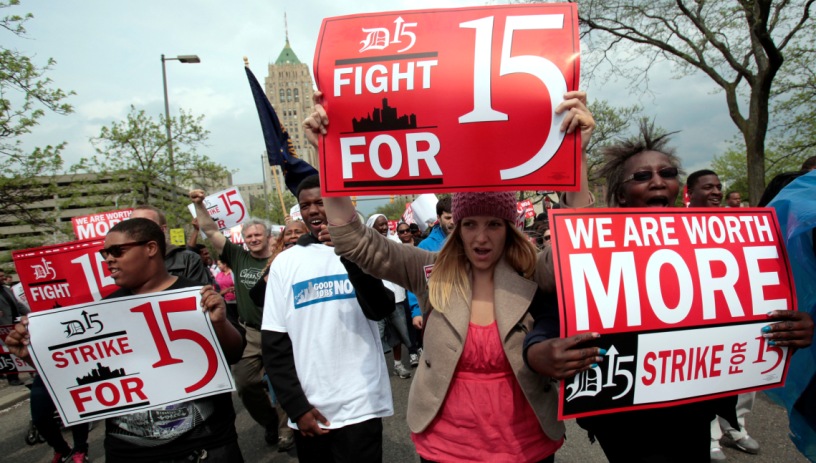 I know this post is going to get a LOT of negative feedback.  I’m not too concerned about that because we all have a right to our opinion.    So here goes.

There is a big push right now (mainly from progressives) to raise the minimum wage to something like $15/hour.   They feel that low skilled, hourly jobs are worth much more that what is paid currently.  They have a right to their opinion (see, I told you so).  But I hate to inform them….they are wrong.  Raising the minimum wage that high is not a good thing.

So, What AM I saying?

What I’m saying is that raising the minimum wage to $15/hour would put too large a burden on small businesses and it would quite frankly be over paying low skilled jobs.  $15/hour is equivalent to $30,000/year if you worked 40 hours a week.   I work with people right now in an office with college degrees that do not make that much a year.  So, you’re saying that someone flipping burgers or running a cash register should make more than this college graduate working in a professional workplace?

I feel that I’m getting a bit off topic here.  Let me bullet point the reasons I think we should not raise the minimum wage

I stared straight out of college with Walmart (yes the evil one) and I made (with a college degree) $7.75/hour.  It was horrible.  But here’s the deal…I didn’t have to take the job.  I chose to take the job.  That’s something that’s missing here.  If you don’t like what an employer pays then go somewhere else.  It’s still a free country (for the time being) so you aren’t obligated to work for them.  I worked that job until I was able to get a better job.  That new job didn’t pay very well either but I stayed with the organization (for the last 15 years) and I have now worked my way up to a nice paying position.

That’s something that many people of today’s generation don’t get.  They want instant satisfaction.  They want to be able to make enough money for that new car, that mortgage and that family right now.  They don’t want to work hard and work their way up from the bottom.  I see it every day in my organization.  These kids straight out of college who haven’t accomplished anything…they think the world owes them something…it doesn’t.

Many companies promote from within.  This means that if you stay at Walmart or McDonald’s and endure the low starting pay you can work your way up.  I saw it myself at Walmart.  If I chose to stay, I could have been promoted withing a couple of years to a very well paying position.  The store manager at the store I was in made a lot of money and he started at a stock boy.  You must be willing to put in the hard work and the time to succeed.   We cannot just increase the minimum wage so that someone with no skills and no experience makes enough that they don’t strive to do better.

One last point.  I was talking to the lady who works at Subway the other day.  She told me that she works that job full time in the morning shift until mid afternoon.  Then goes to another full time job from mid afternoon to late night.  Then on the weekends she works an overnight job at a hotel.  She is doing it right.  She is working hard to improve her life.   She said her goal is to eventually own a Subway franchise.  She is saving the money from all of these jobs to make it happen.  We need more people with that kind of work ethic in this country.

It’s kind of late and I’m sure some of this may be incoherent so I apologize.  But leave a comment below with your opinion.  If you disagree, tell me why.   I love a good debate.  But just keep it civil.