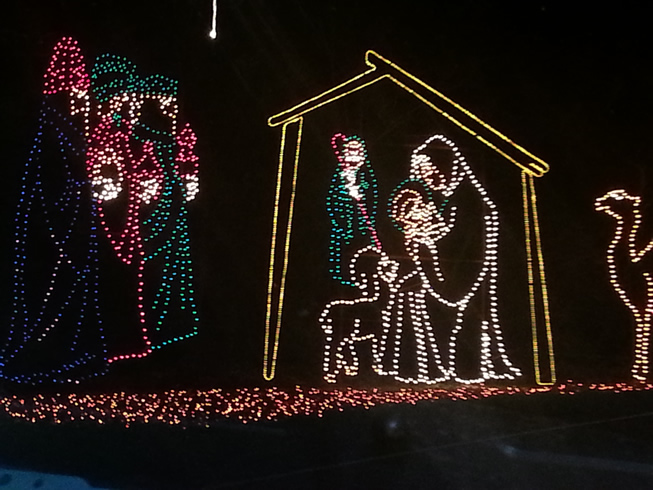 We live in Savannah, Georgia which is roughly 2 hours away from Charleston and we have discussed going for several years.   This was the year we decided to go.  The display is up until Dec. 31st so we went the day after Christmas.  We loaded our car up and headed for Charleston around 1:30pm on Thursday.

After looking for a few Geocaches along the way (look it up).  We made it to our hotel and settled in.  For a family with 3 kids, that means getting everyone settled and yelling at the two boys to stop jumping on the bed.   Then it was off to eat dinner.  The kids chose Red Lobster and that was great because we had a gift card.  This is where the first exciting event happened.  After eating, we were in the parking lot and my 4 yr old said his tummy hurt.  He said he had to throw up and we grabbed the first thing available…a plastic container with cookies from our neighbor.  The trip really isn’t complete until your kid has thrown up in a Christmas cookie container while sitting in the car while in the Red Lobster parking lot.  After emptying his stomach, he felt fine and we were off to the park.

We knew we were in the right place as we were around 1 mile from the park and the traffic was already backed up.   Once we finally made it to the park, we paid our $15 and began driving through the 3 mile trail of lights.  There were a lot of cool displays and some that I wasn’t able to get pics of including a huge display of the Golden Gate Bridge.

There are 3 parking lots where you can park and explore the winter wonderland and Santa’s Village.  Here you can find a carousel, rock climbing wall, food stands, and restrooms.  We took the kids to ride the carousel and look around at some of the other light displays.  I was the only brilliant person there in shorts and a t-shirt…yes I’m aware I looked like an idiot.  I wanted to buy some hot chocolate but couldn’t force myself to pay $2.50 for a small cup of hot chocolate.

After walking around we got back in the car and made another trip though the festival of lights.   The cool thing is that once you pay, you can make as many trips though the lights that night by using the re-entry lane just before the exit lane.  There are so many lights that you could go through several times and still see new things you hadn’t noticed.

One note about the pictures, they aren’t great quality because we were moving and my phone was having trouble focusing on some of them.  Anyone else been to the Holiday Festival of Lights in Charleston?  If so, share your experience by commenting below.  Or, let me know what your favorite light displays are.