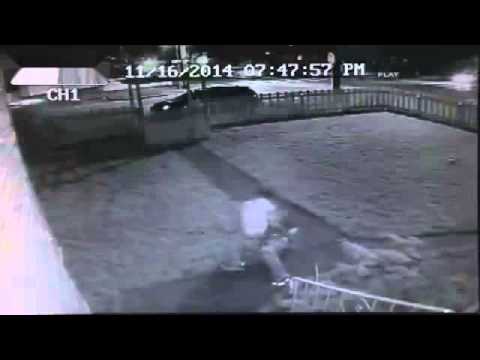 I just ran across this video tonight and decided to share it with you guys.  It’s awesome!!

Here’s what happened.  During the night of Veteran’s Day (is that confusing?), a burglar/scumbag decided to break into a house and spend the night.  Fortunately no one was home at the time.  The guy who lives there was told by his neighbors about it later.  I’m assuming they saw the guy as he was leaving.  The owner of the house has surveillance cameras so he checked the footage and sure enough this guy was in his house.

Well, the homeowner installed some security measures that would alert him when anyone crossed his fence line. Then a few nights later (not sure how many) the same guy comes back and tries to get in the front door.  When the would be burglar can’t he heads around back.  The homeowner was home this time and knew the guy was there because he was alerted by his new security measures.

Here’s where it gets good.  The homeowner?? He’s a former paratrooper with the 82nd Airborne.   I live in a town with an Army airbase and let me tell you….these guys are tough.  You can imagine what happens next.

The owner confronts the burglar on the porch.   The owner tells him he isn’t leaving until he talks to the cops.   A side note, the owner doesn’t look very imposing on video.  He doesn’t appear to be physically imposing.  But looks can be deceiving.  I’ve known guys before who were small but they could absolutely take down guys twice their size.  So, back to the story.  The burglar makes a big mistake at this point and takes a swing at the owner (off camera).  The owner catches him with an uppercut and then decides that it would be best for him (legally) if they were on camera.  So he directs the encounter down to the yard.   You’ll have to watch the video above to see the result.

Oh, and I have to say that the police response time was very good.   Anyway, take a look at the video and enjoy.  The owner put the video to music and posted it to Youtube.