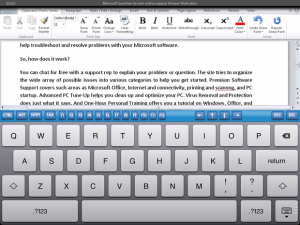 CloudOn, which allows you to use your iOS and Android tablets to create, view, or edit Microsoft Office files, is expanding to 16 more countries.  Until now, you could only use CloudOn if you lived in the United States, UK, or Canada.

CloudOn is expanding to Italy, Spain, France, Ireland, Israel among others.   For those of you worried that you’ll have to pay your hard earned deniro or lira for this previously free app…it will remain free.

With the release CloudOn introduces some new features, including:

CloudOn is a great tool for business users who are on the go but still need to access and edit their MS Office documents.  See the full press release below.

CloudOn Brings its Ultimate Productivity Workspace to the Global Market, Launches in 16 CountriesCloudOn, the mobile solution for creating, editing, saving and sharing Microsoft Office and Adobe documents, launches throughout Western Europe and Israel

In early January, CloudOn launched on iOS and quickly became the no. 1 Free App and the no. 1 Productivity App for iPad in the U.S. Apple App Store. The app has since launched for both iOS and Android in the U.S., UK and Canada, receiving high critical acclaim, outstanding user reviews, and generating huge demand for the productivity app across the globe.

The service operates by using the power of the cloud to connect to Microsoft Office software on CloudOn’s servers; this allows users to create and access Microsoft Office documents the way they are used to, using the exact same look and functionality. Users can track changes in Word, manipulate pivot tables in Excel and view PowerPoint slideshows in full presentation mode right from an iPad, and access them at anytime in their Dropbox, Box or Google Drive account.

CloudOn also provides Adobe Reader to view PDFs – everything from simple forms to complex 3-D documents – and a universal viewer for any file, ranging from raw Photoshop images to everyday image files, including: PNG, JPEG and GIF.

The app has a native, user-friendly interface fully optimized for the iPad and Android Ice Cream Sandwich and Honeycomb tablets, 3.1 or higher. CloudOn also comes with a host of other features designed to enhance mobile productivity, including:

In-app email integration to send emails along with attachments with a single tap
Automatic document saving and storage in Dropbox, Box or Google Drive
Quick and easy 2-step in-app registration process
Anytime mobile access even in low-bandwidth conditions
CloudOn is also announcing some exciting new productivity features that will be launching in the US, UK and Canada, as well as throughout Western Europe and Israel. The new features allow users to:
Create and send direct links to files for collaboration
Copy and paste text between email, browser other local apps, and Microsoft Office
Use Drag & Drop functionality to easily move files & folders (currently iOS only, coming to Android soon)
Open web links directly in the native browser
CloudOn is available for download now in the Apple App Store and Google Play.

To download CloudOn for your Android tablet, visit: ­­­­­­­ https://play.google.com/store/apps/details?id=com.cloudon.client