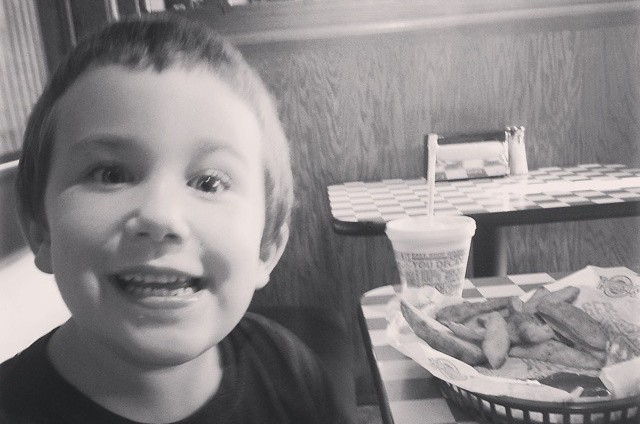 I’m starting a new series of posts today.  You’ve heard of kids say the darndest things…well that’s true of my kids as well.  Every time one of them says something crazy/funny/creepy my wife will look at me and say “There’s a blog post for you”.  I usually end up forgetting exactly what was said and it is gone forever.

Well, I’m going to try and start keeping up with this stuff.  Maybe I just need to leave a recorder on anytime I”m with my boys.  They seem to say these things at very random and strange times.  Anyway, here we go.

So my five year old and myself are in the car driving to my mom’s house.  He is very excited about seeing Grandma.  My dad passed away several years before he was born but he has seen pictures of my dad and talks about granddaddy a lot.  He talks about him being in heaven.   Well, as we got near to grandma’s house he said “Grandma lives all by herself”.  I told him “Yes, granddaddy is in heaven and all of grandma’s kids have grown up and moved out”.

At this point I told him that his mom and I would live in our house by ourselves when he and his brother and sister grow up and move out.  He then says (in a very matter of fact way), “No, just mommy……….because you’ll be dead“.  Now, this took me by surprise and I freaked out for a second.  I asked him what he said and he repeated it.  He said that mom will be living by herself.  He and brother and sister would be grown up with their own families and yes….I would be dead.

I guess because my dad died and my mom is by herself he just assumed that’s how it would happen with me.  I hope that’s it and he’s not some kind of fortune telling toddler.