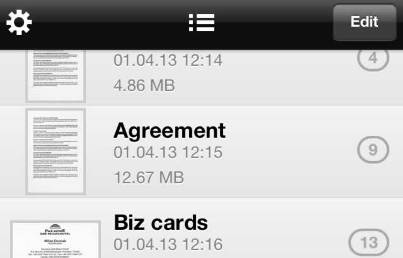 It’s always handy to have the ability to scan documents on the go.  Without carrying around a mobile scanner, you have the option of using your smartphone.  Here is a press release regarding the release of a free version of SharpScan for iPhone.

Pixelnetica, an established leader in mobile computer vision application development, is pleased to announce the release of a new Free version of SharpScan with all of the functionality of the Professional product. SharpScan is the industry-leading mobile scanning app for the iPhone. Its unparalleled image processing speed and quality allows user to scan documents and photos on the go in less than 3 seconds per page.

Simply taking a picture of a document with the iPhone camera does not result in document quality images. Photos display geometric distortion resulting from the angle of the camera in relation to the document and often have unwanted background shadows. SharpScan was created to overcome these inherent shortcomings and to produce high-quality documents from the iPhone just as if they were scanned with a conventional scanner. Scanner-quality documents can now be produced on-the-go quickly, easily, and conveniently from any iPhone.

SharpScan’s unique Smart Crop feature offers fully automated boundary detection, cropping, image alignment, and perspective correction for fast, accurate image acquisition, though these parameters may be adjusted manually by the user as well.
Non-destructive image editing features are included that allow the user the freedom to edit and experiment with their documents with the confidence that they can always revert to the original image.
SharpScan it is the only mobile scanning app on the market that creates tiny true Black-and-White, scanner-quality, PDF images. Combined with the lossless image compression results in files which are up to 20 times smaller than a normal JPEG, an extremely important feature when data transfer speed or cost is an issue.

The Smart Crop feature sounds like a great feature that should improve the quality of the resulting document and speed up the process of creating the document.

Here is the remainder of the press release.

SharpScan’s provides a pleasant mobile experience through its intuitive user interface. The menus are laid out clearly and are easy to navigate and the controls are simple to master allowing users convenient access to all of its advanced features, including document password protection, printing and integrated sharing via email, Dropbox and etc.

“SharpScan raises the bar for mobile scanning applications to a new level,” says Pixelnetica CEO, Dmitry Harchenko, “It’s designed to take full advantage of the iPhone’s hardware capabilities such as muticore processing and GPU acceleration. Our proprietary artificial intelligence algorithms that accurately identify the edge of a document and automatically make cropping decisions without help from the user are unmatched by our competitors.”

But Pixelnetica is not resting on its laurels. The company is hard at work on a new version that will feature improved algorithms, faster speeds, and high quality as well as support for tablets and synchronization across devices via the cloud. Users of the current version will receive the upgrade free of charge.
The only difference between the free version and the full versions is that the free version includes in-application advertising and the PDFs include a reference to the product, though the images themselves remain unaffected. These minor limitations can be eliminated at anytime by purchasing the full version conveniently from the app.

Both SharpScan and SharpScan Pro are available through the Apple store. For more information, including screenshots, demonstration videos, tutorials, and answers to Frequently Asked Questions, please visit www.pixelnetica.com.