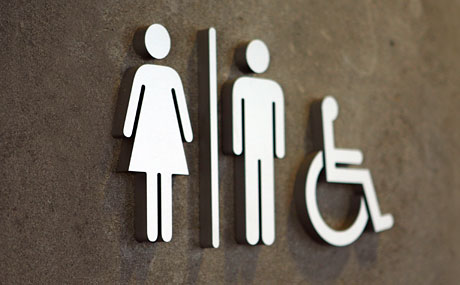 My four year old has a mission in life.  It must be a great feeling to be only four and already know what you want to do with your life.  What’s his mission?   To go to every bathroom on the planet.  It never fails, when we go somewhere the first thing he does is look up with those adorable eyes and say “Daddy…I gotta go potty”.  My response is always the same “Poop or pee?”.  Because his answer determines whether I take him or my wife takes him.  For you ladies out there, men’s restrooms are generally disgusting and I would rather he “sit” in the ladies room while he is still young enough to do so legally.   Honestly, it’s like he’s a toddler Indiana Jones looking for his own Temple of Doom.

Here’s the fun part…he knows what happens when he answers each way.  So when we go to a restaurant…like today…he first says he has to poop…that gets him in the ladies room.  Later during the meal he looks at me and says  “Daddy, I gotta pee”.  He knows this will get him into the men’s room.  Sometimes he wants to mess with me, so he’ll say “pee” but when we get to the men’s room he looks up and says “Sorry Dad, I gotta poop”.  I’m pretty sure he grins when he says it..because he KNOW what he’s doing.  Then begins the process of de-funkifying (it’s a word) the toilet seat.  That’s always a lot of fun and makes going back to my meal a joy.

I don’t know why he feels he must see the inside of every restroom in the world.  Maybe he thinks he will eventually find that one perfect restroom with massage chairs, and ice cream dispenser, and 24/7 Sprout TV.    When I ask him why he must go every time we go somewhere his answer is (with a puzzled look on his face) “I just gotta go”.

So we will continue to assist him with his mission to make deposits at every restroom within his immediate area until he turns eighteen.  At that point it’s on him.  Of course, he only has a year or two left of being able to go to the ladies room with his mom…after that he will have to settle for exploring men’s rooms.  Considering the cleanliness of men’s rooms…that may be a treacherous task.

So, I’m curious as to if your kids do the same thing when going to restaurants or shopping?

2 thoughts on “The Great Bathroom Explorer”