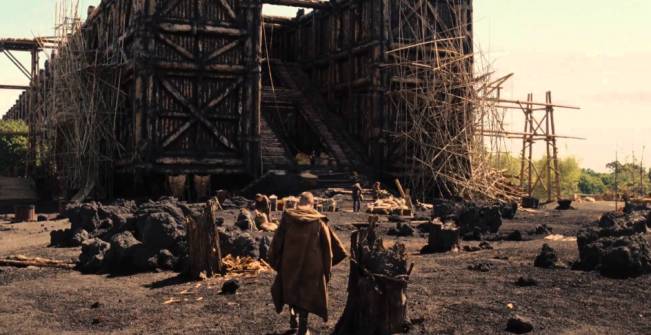 As I sit here I’m not sure I should write the post.  It’s going to be a touchy subject and either way I’m sure I’ll offend someone.  But, I feel like I’m being led to write it…so here goes.

I’ve been hearing a lot the last few days about the Noah movie starring Russell Crowe.  Many Christians are in an uproar because they feel it does not adhere close enough to the Biblical account of Noah and the flood.  There are some pretty angry people our there and they think it’s  a conspiracy by the director, Darren Aronofsky who is an atheist.

I haven’t seen the movie so it’s not fair for me to judge it on it’s quality.  But from everything I hear, they did deviate pretty far from the account of the flood (and Noah) in The Bible.  Now, I should tell you that I’m a Christian and therefore my views (and my entire life) are affected by that.  But I’m about to surprise you with my opinion on this…at least I think I am.

I don’t see what the big deal is.   Most movies made from books deviate very far from the source material.  And let’s be honest, who really thought that a movie, based on a Biblical account, directed by an atheist would be true to The Bible?   Darren Aronofsky is out to make a blockbuster summer movie (and possibly push an environmental agenda), he’s not trying to present the Gospel.

So, what should we as Christians do?  Should we jump up and down and scream about the travesty and tell people not to go see it?  I say no.  I think we should use this as an opportunity to tell people about God and especially the Good News of Jesus Christ.  Think of the witnessing opportunities created with our unsaved friends after they see this movie.   I know for me, it’s easier to witness when the conversations turns to spiritual matters naturally and it is not forced.

Romans 8:28 tells us “And we know that all things work together for good to them that love God, to them who are the called according to his purpose.”  God can take any situation and turn it around for good.  I believe that He can use this movie to reach people who may have never given The Bible (or God) a second thought.   I can see a situation where an unbeliever sees the movie and decides to open The Bible and read the true account.

I don’t know what the outcome will be for the movie. It may be a bust or a blockbuster but I know that God is on the throne and He is in control.  Because of that I refuse to let some movie made by an atheist get me too riled up.

What’s your opinion on the situation?  Leave a comment below and let me know what you think.

10 thoughts on “Uproar Over Noah Movie”