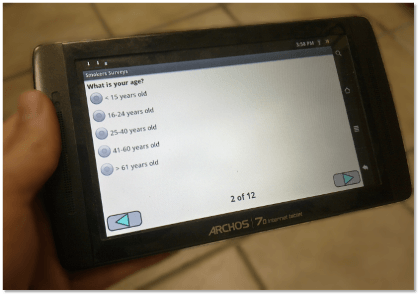 Businesses base their decisions on anticipating and meeting client needs. Consequently, interacting with their clients to receive this vital data is an important part of conducting business. However, traditional client survey reports have been anything but accurate and have helped disenfranchise clients from businesses rather than draw them closer.

Phone surveys have been the bane of peoples’ existence for decades. It has almost become a second sense that when the phone rings at the most inopportune time that you know that it is someone politely requesting a phone survey. The problem is how do you remain polite as you tell them what they can do with their survey. And do you think this builds better client interaction?

Door-to-door surveys are not as common as phone surveys but many people resent someone infringing on their personal space for something as menial (in their opinion) as a survey; once again, not the best way to build better client relationships.

Technology has provided the answer for businesses to improve client interaction while simultaneously receiving the accurate customer feedback they crave so desperately. The creation of the mobile survey app, also known as the CAPI (Computer-Assisted Personal Interviewing) survey, was developed in response to the inadequacies in traditional survey techniques and due to advances in technology pertaining to tablets, phablets, and other types of PDAs.

Mobile survey apps address many, if not all, of the disadvantages of traditional survey techniques. They enable the surveyor to approach the target market on neutral territory when that person is most amenable to being interviewed and therefore most likely to provide accurate and relevant responses and build a strong bond between the company and the client.

Mobile survey apps give the company additional benefits above and beyond better client interaction. They are cheaper as well as easier to configure and change than traditional survey methods. They can be remotely monitored in real time (assuming there is WiFi available). The inbuilt analysis capabilities of most mobile apps is extensive saving further time and money from the use of these apps. Similarly, the mobile devices on which the apps run enable the use of photos, film clips, and other forms of media that could not be used previously.

Mobile survey apps have been a panacea to a survey industry that was fast becoming irrelevant. They are yet another example of how technology can aid people in so many different ways.